The final season of the original run of The Wall of Sound is guided for you below: 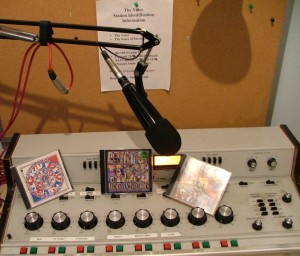 The albums on CD appearing above (left to right): The History of The Grateful Dead Part I: Bear’s Choice (1973) – choice recordings from 1970 collected by The Grateful Dead‘s original sound engineer (and LSD wizard) Owsley Stanley aka “Bear” (1935-2011), Mental Medicine (2006) by Sacramento-based Army of Trees and In the Land of the Dark, the Ship of the Sun Is Driven by THE GRATEFUL DEAD (1967) – The Grateful Dead‘s first Warner Bros. album.

Now, as time and space would have it, nearly 13 years have passed since the finale episode first hit the waves of air and inter-webbed nettage…

Although I did record more a little over 200 hours worth of The Wall of Sound, the 100th regular episode, which was so near, was then denied me by fate and circumstance…